This superbly delicious, elegant holiday ham has wonderful flavors and is easy-to-make for the beginner cook. It’s made with a fresh cranberry sauce and will tickle your taste buds! Gluten-free

You want a make a delicious Christmas dinner but, you want to keep the effort to a minimum because you just don’t have the time to prep a turkey with brine. Am I right?

So, why not make a delicious ham for your Christmas dinner? This Cranberry Orange Baked Ham will have your family wanting seconds!

Orange and cranberry flavors compliment each other and when you add cinnamon and cloves combined with  honey and topped with a crusty sweet brown sugar topping, you’ll get an irresistible ham that only takes minutes to prep! Make these delicious Cranberry Orange Mimosas too.

This is the perfect Christmas or Thanksgiving ham when you have so much to like trying to get the stain out of that Christmas table cloth Aunt Mary gave you before she happens to sit at that place setting and notices.

See 10 Tips to Host a Stress Free Holiday with Ham.

Disclosure: This post contains Amazon affiliate links which means, if you make a purchase, I’ll receive a very small commission but, the price you pay is the same. 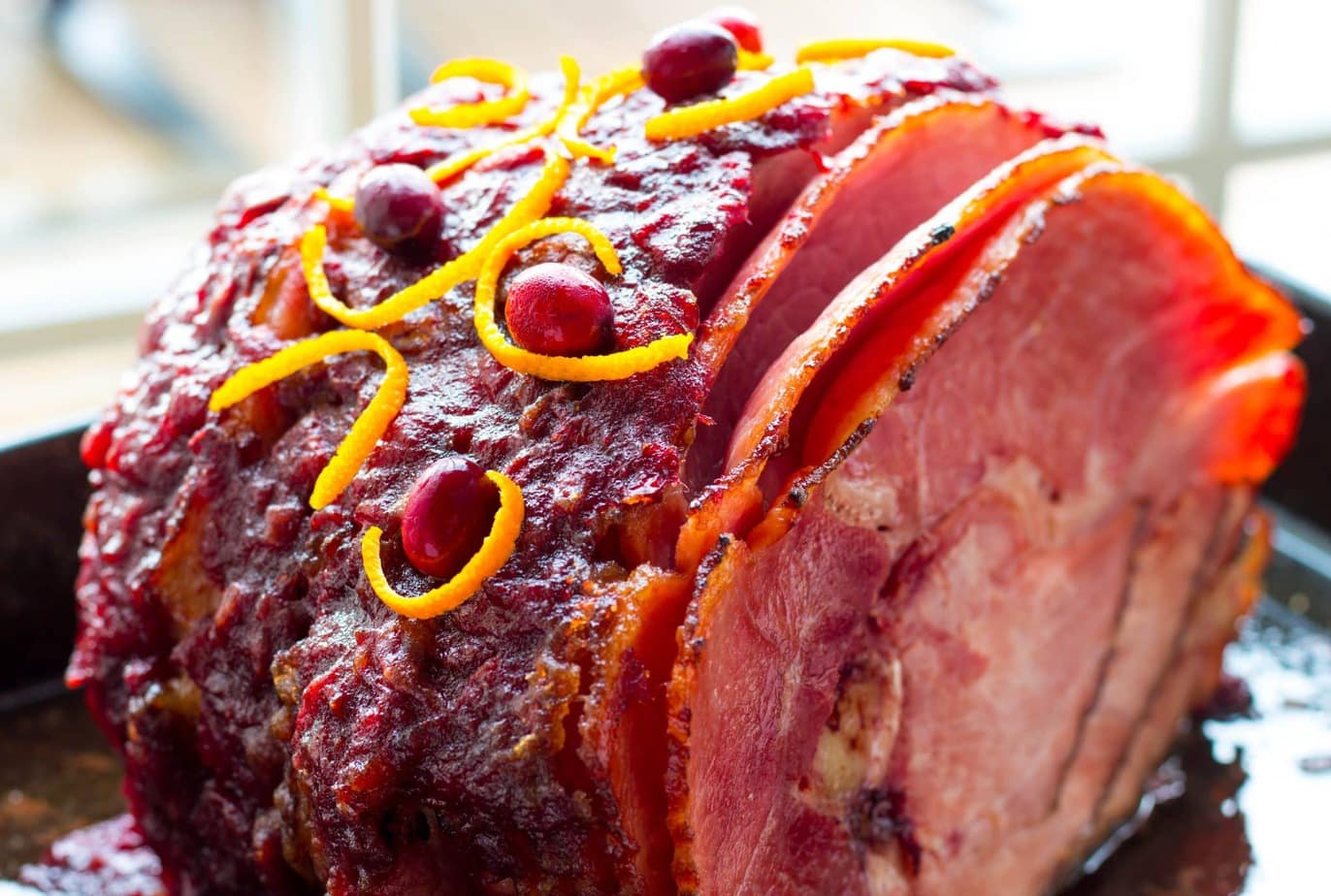 What is Christmas dinner without ham? Don’t you just love the aroma of a ham baking in the oven? Those aromas are one of the things I remember from Christmas past. Now, add the aroma of cinnamon and cloves baking and your kids will never forget mom’s ham! You need them coming back for dinner and kisses!

Ham is a meat that tastes so good as is. But, when you add some flavoring to it, it goes from great to phenomenal!

What’s even better is having these delicious ham leftovers to freeze or make other tasty recipes. It’s a relief to pull some ham out of the freezer on nights when you are just too tired to cook. 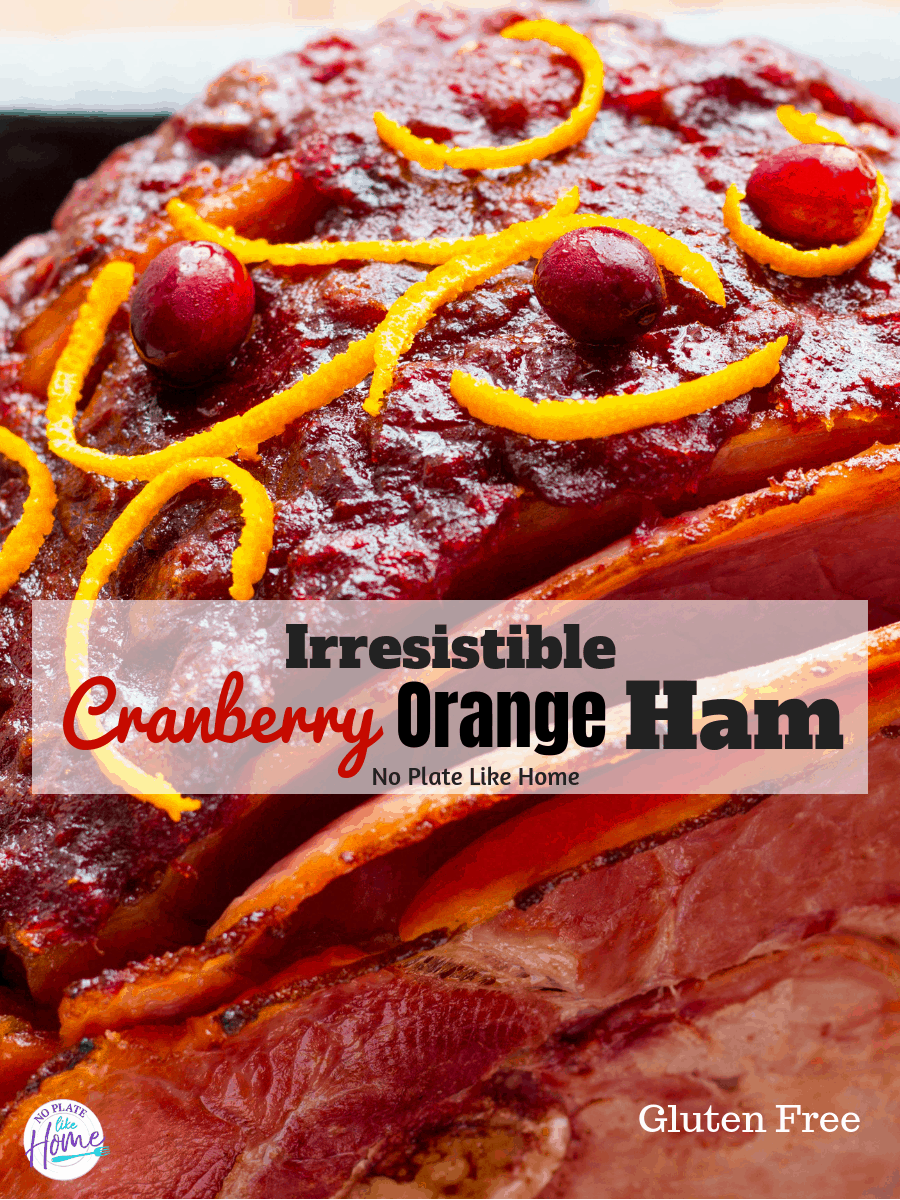 This ham and cranberry orange sauce is super easy to make.

If you are limited on oven space, this Oster Oven Roaster holds up to a 24 lb ham or turkey and cooks faster because the heat is condensed around the meat. Plus, the inside comes out for easy cleaning or you can buy liner bags. This oven roaster can be really convenient during the holidays or any large gatherings.

Or, use an old fashioned roasting pan as seen below.

First, add 1/2 cup of water to the bottom of a large roasting pan with at least 4 inches high sides.

Add a 8-10 lb spiral cut ham, flat side down, on 275F (135C)covered with foil for 2 hours. Make the cranberry orange sauce just before the ham is ready to come out of the oven or earlier if you prefer. 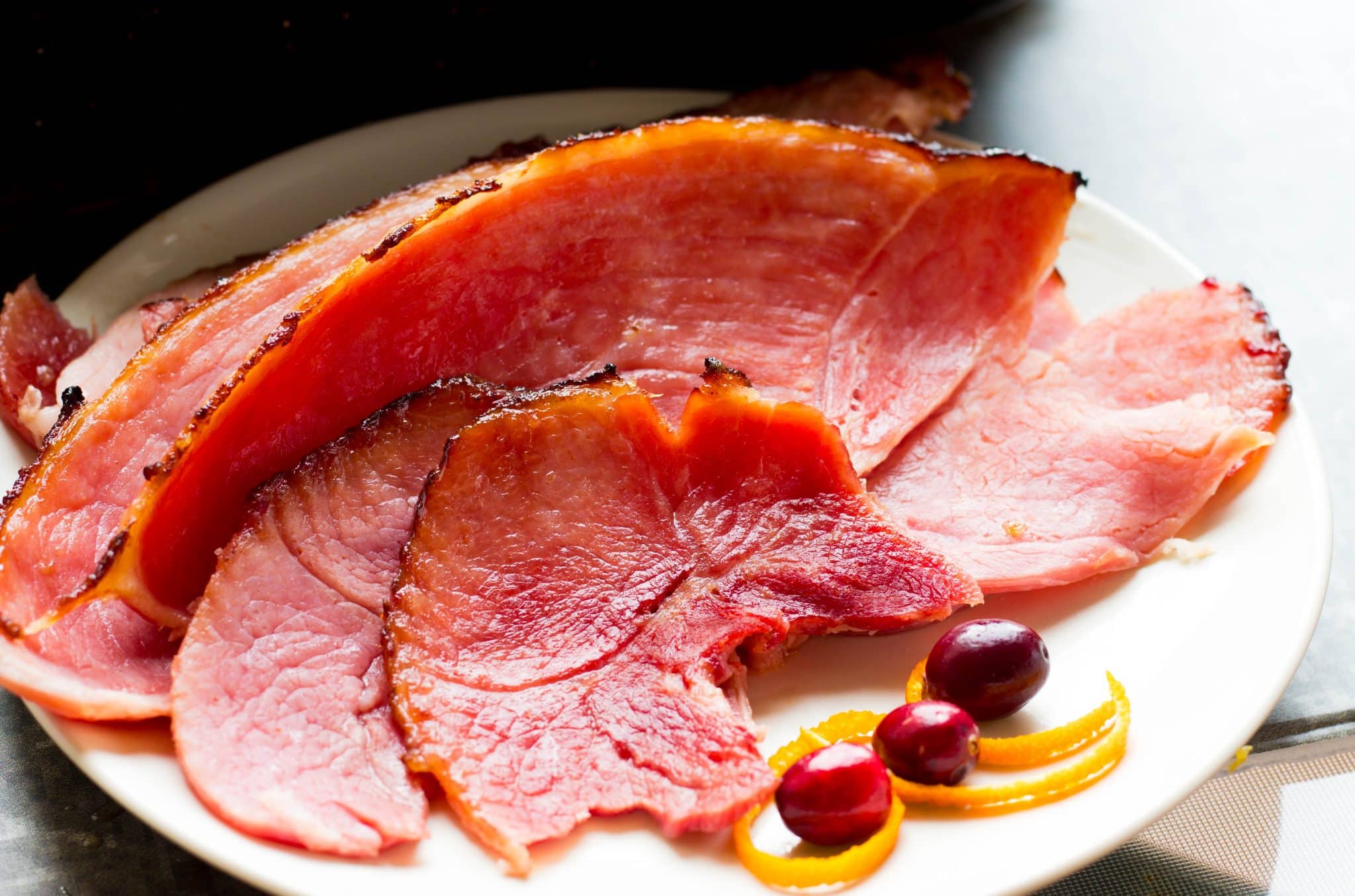 How to Make Cranberry Orange Sauce

*The printable version of this recipe is at the bottom of this post.

In a medium sauce pan add:

juice and zest of half of an orange

Cook on medium heat for 10-15 min. Stir it occasionally as it’s cooking and cover it when you hear the cranberries start popping. Add water to thin it out a bit.

If you want the sauce to me smooth, use a hand-held mixer or put it in a blender.

Then, spread the cranberry orange sauce all over the top and sides of the ham with your hand. Begin adding the sauce at the top of the ham as gravity will take it downward. Just fill in where it doesn’t go.

Next, sprinkle about 3/4 cup of brown sugar on top of the cranberry orange sauce that you just added to the ham, as evenly as you can. 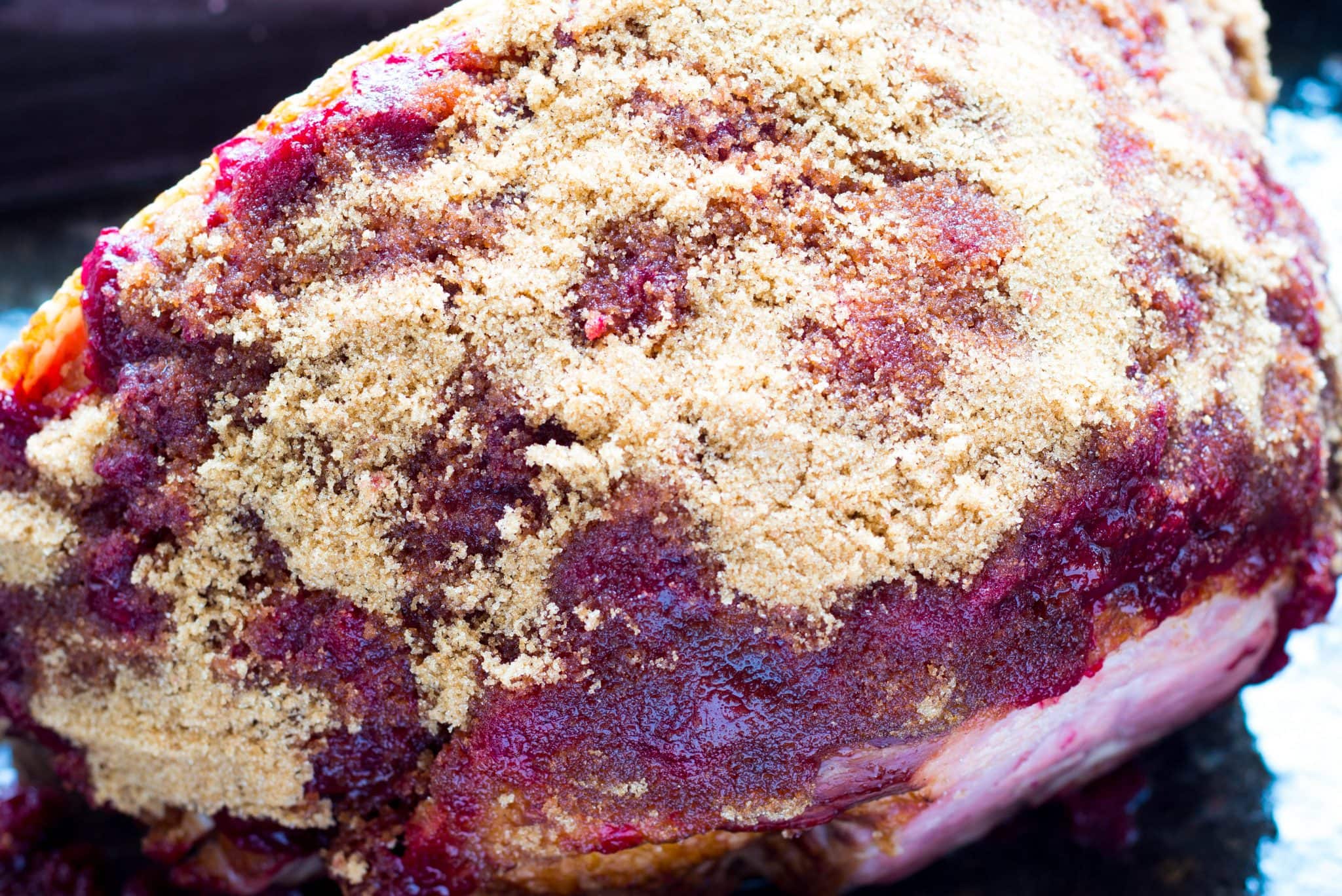 Finally, place the ham back in the oven and bake it again with the sauce and brown sugar on top for 15 min while the brown sugar melts and crusts the outside of the ham. However, make sure the ham isn’t too close to the heat, or it will burn and smoke and possibly catch fire because sugar is flammable! 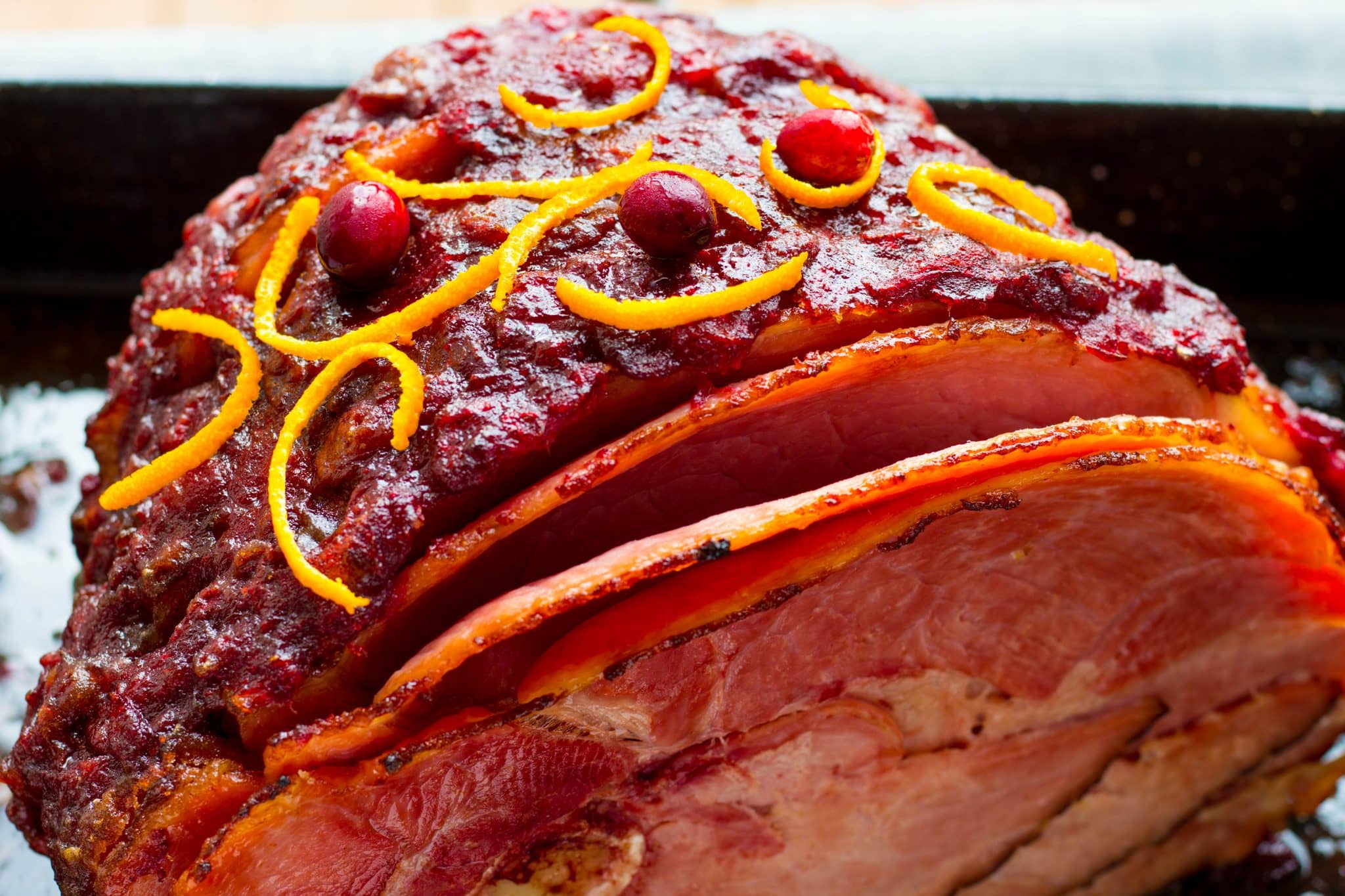 When you remove the ham from the oven, let it rest for about ten minutes before cutting.

Irresistible Cranberry Orange Baked Ham is so delicious and fitting for Christmas or Thanksgiving dinner! The aroma of cloves, cinnamon and brown sugar will fill up your house with the sound of cranberries popping and whisper to your family’s senses that there’s a fabulous meal coming soon!

Plus, you need a main dish that’s easy to prep, cook and serve after long days and weeks of preparation during the holiday season! You still have to return those ugly slippers sweet Aunt Mary gave you.

See 10 Tips to Host a Stress Free Holiday with Ham.

JOIN OUR NEWSLETTER and get delicious recipes, free printables and useful tips sent right to your inbox!

Rinse the ham and ham bone so the sugar doesn’t alter the taste of the ham leftover recipe.

Using the ham bone, boil it in one gallon of water and make ham stock. 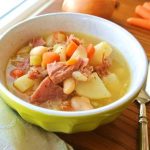 Easy and tasty One Pot Ham, Potato and Bean Soup

Using the ham bone and some of the leftover ham, make One Pot Ham, Potato and Bean Soup. 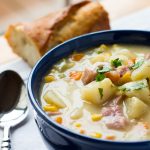 Make a delicious and hearty One Pot Ham Potato and Corn Chowder. 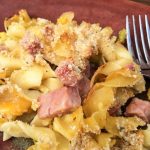 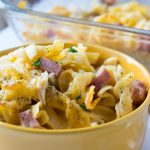 Cheesy Ham & Turkey Noodle Casserole is a great way to use up Thanksgiving leftovers or substitute chicken for turkey or omit the poultry altogether. 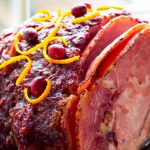 Store this ham in your refrigerator for up to 5 days or freeze it for up to six months.

Save the Ham Bone! 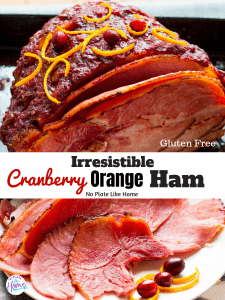 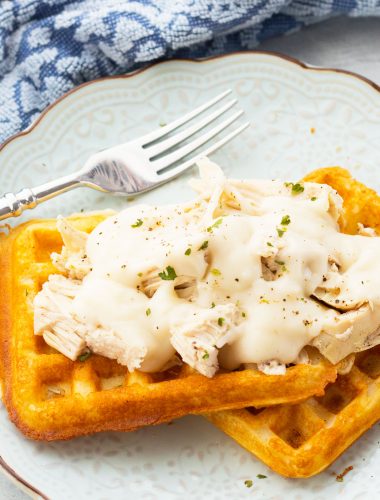